Before World War 1 belligerents began active bombing and pilferage, Great Britain (the United Kingdom or the UK) was both a military and economic power. Britain enjoyed a substantial presence across a wide expanse of the earth, one that many other aspiring powers desired. The UK’s stature also allowed its treasury to lock the exchange rate of one British Pound (GBP) to about five United States dollars (USD).

However, WWI left the UK and other belligerents in outstanding debt because they had borrowed billions of dollars from US financiers to support their war activities. Moreover, the WWI belligerents abandoned the gold standard in 1914 as the war began. For the UK, the era of the Pound’s dominance that had started with the prominence of the British East India Company in 1815 was coming to an end.

By 1944, when the Bretton Woods system was established, the USD was the undisputed global currency. At around the same time, the GBP was pegged to the USD at the rate of £1 for every $4. However, the UK devalued the GBP several times until the currency adopted a free-floating rate in 1971.

No sooner had the Pound began floating freely than it crashed by almost half against the greenback. By March 1971, one Pound could fetch just $2.42. In 1973, OPEC countries imposed an oil embargo against the United States and her allies to support Israelis in the Arab-Israel war that had just broken out.

The result of the embargo was a spiraling upwards of oil prices. Another consequence of the embargo was the US’s skyrocketing interest rates, which peaked at 21.5% in 1980. The Pound then seized the opportunity to gain about 54% against the USD to $2.44 between October 1976 and October 1980. However, the normalization of US interest rates that followed helped the USD to achieve the all-time highest valuation against the GBP of $1.07 in February 1985.

In nominal terms, the British Pound is more valuable than the US dollar. It was only in 1985 that the greenback appeared to surpass the GBP in the exchange rate. However, the Pound survived the scare and held its status as one of the few currencies, including the Kuwaiti dinar, whose exchange rate is superior to that of the USD.

Over the past five decades, the British Pound has been declining against the USD, although gradually. Many things have happened between the floatation of the British Pound and the GBP/USD currency pair’s current situation. Major events such as the Brexit vote and the Great Recession accelerated the GBP/USD exchange rate decline.

Even as the GBP’s nominal value against the USD has been declining, the relative value (real value) has been falling too, just a bit faster. What do we mean by real/relative value? Simply, it means the strength of the greenback in global commerce has been on the uptick instead of the GBP’s, which appears to be in perpetual decline. Let us explain further:

Each era of global trade has a dominant currency, which is also the most valuable.

Global trade has eras, where the most economically advanced civilization dominates each era. In the early centuries AD, the Romans and the Greeks were the dominant civilizations. That is why silver Drachma, the silver Denarius, and the gold Aureus coins were widely used in commerce in that era.

Following this tradition, the Portuguese began issuing their currency in the mid-1400s to mid-1500s, a period (of about 80 years) when Portugal was an overwhelming economic and military superpower. Spain succeeded Portugal as the superpower, and the various currencies it issued dominated global trade for about 78 years.

The Netherlands and France succeeded Spain, respectively, but they all receded into oblivion when the British Pound attained global prominence in the early 1800s. For about 105 years, the Pound was the global reserve currency until WWI devastated European economies, including the UK’s, hence opening an opportunity for the US dollar to dominate.

While the GBP has maintained a higher exchange rate than the USD, the USD has continued to strengthen its position as the dominant currency in today’s global economy. However, the USD does not have an exclusive claim to this status, bearing in mind that currencies like the Euro (EUR), Swiss Franc (CHF), and the Chinese yuan (CHY) have a significant claim to global trade transactions.

Brexit accelerated the deterioration of the GBP against the USD

Figure 2 depicts the relationship between the GBP and the USD over the past 50 years. As is apparent, the GBP has consistently declined over the period. However, the most crucial takeaway from the figure is that various significant phenomena have expedited the British Pound’s fall. Other than the Great Recession, Brexit has been the most consequential event that spurred the GBP’s deterioration. 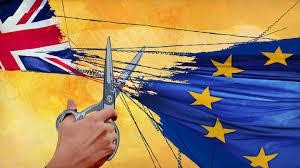 Brexit plunged the UK into uncertainty concerning its relationship with Europe and the global economy at large. Analysts worried that the GBP might be punished because of the uncertain ending of Brexit. That is why currency traders were quick to seize any morsel of good news concerning the Brexit deal. Most importantly, Brexit diminished the UK’s position in the global economy’s power-play, which means we are yet to see the worst of the GBP/USD exchange rate.

The true worth of a currency lies in its status in the global economy. For the past 50 years, the USD has been gaining against the GBP, meaning that the greenback is much stronger. Depending on how the Brexit debacle ends, the worst scenario could be a complete dethroning of the GBP by the USD close to 100 years since the British empire collapsed.