Price alone doesn’t tell much, but there are ample indicators out there for traders to use so that they know how it moves and changes over time. One such analyzer is the exponential moving average (EMA), which they use to discover points of trade and get a bigger cut of the Forex pie. So let’s dive right into it and find out how you can benefit from it.

What is the exponential moving average?

EMA is a kind of moving average, also shortened as simply MA, which places greater weight on the most recent data points. Because of that, it is more sensitive to alterations in price and has a lower reaction time than its cousin, a simple moving average (SMA) that places equal stress on all observations.

How to calculate EMA?

In order to determine the EMA, one has to go a step further than the SMA. Let’s say that in order to do so, we require 20 days as the observation number. This means that we can only attain our SMA after the 20th day, whereafter, on the 21st day we use that SMA as our first EMA. 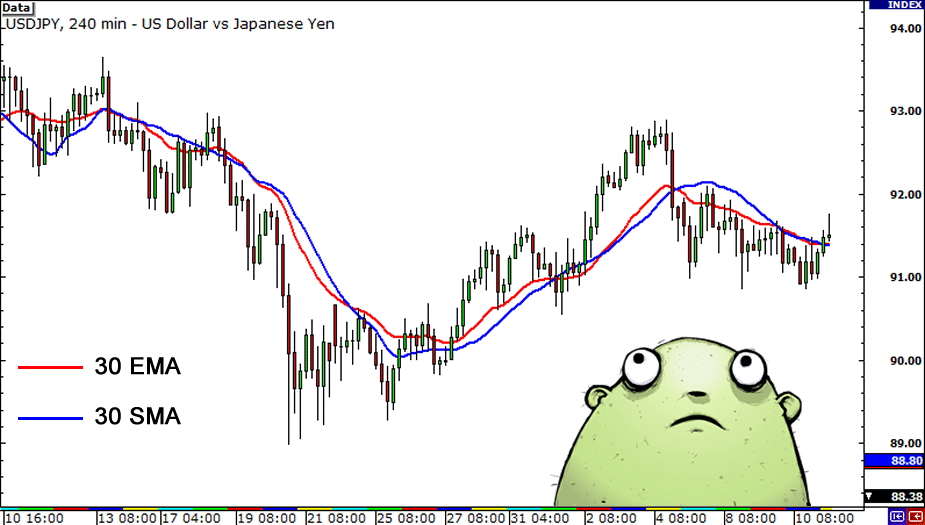 After this, we determine the multiplier that will give weight to our EMA. Its formula is as follows:

After this, our complete formula to determine the present EMA is:

As mentioned in the beginning, EMA places additional emphasis on the latest prices. On the other hand, SMA gives equal emphasis to all observations. Again, more weight is given to the recent price for an EMA with a shorter time period compared to an EMA with a longer time frame.

Pros and cons of EMA

Let us take a look at the advantages and drawbacks of using EMA as a trading tool.

One of the main advantages of the EMA is that it moves quickly and is highly sensitive to price swings. This also means that it can track price changes more closely than its simple counterpart. Due to this, the EMA is highly feasible for short-term trading. It gets rid of the effect that the lag has to a greater degree.

Since the emphasis is more on previous days, it stays right on the heels of price action and is able to react better. Traders would know how desirable that can be when trying to discover a signal. It is ideal for trending markets when the market is trending strongly and also able to sustain the trend.

The main drawback of the EMA is that since it hugs the price action so tight, it is prone to cause false breakouts and provide erroneous signals. Because it is faster than its counterpart, it entraps the trader by generating false signals and becomes less than ideal, especially in slower time-frames.

Traders also feel that placing more stress on the latest trends biases the observation, which is what leads to those false alarms. On top of that, it relies completely on previous data. Economists have reasons to think the efficiency of the market renders historical data unimportant since it cannot tell us anything more about future trends than what we already know. 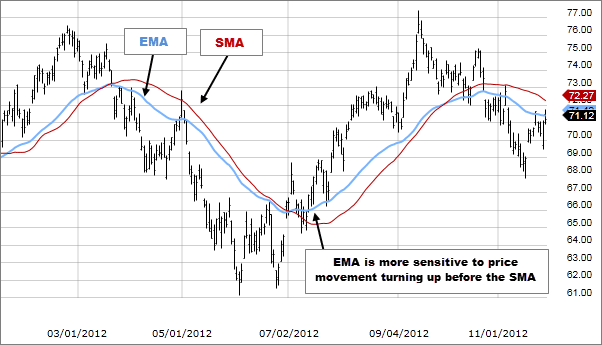 As the name suggests, the SMA is the basic form of the moving average that places equal stress on all observations within a time-frame. But EMA, with its prejudice for recent historical data, is more reactive to price changes.

The observations that we get from the EMA are provided in a timely manner, which is the main reason why traders tend to prefer it. However, it is ideally suited only for shorter time frames. For longer, more general observations, the SMA is preferred. Verily, neither one is better than the other since an experienced trader would utilize them both to get a holistic view of the market trends.

EMA also provides indications of areas of support and resistance. An ascending EMA is indicative of support for the price action, and a descending EMA is indicative of resistance. Neither of the MAs is made to discover the exact signal for trade. It may allow you to trade in the basic trend direction, even though with a slight lag for the entry/exit points.

The EMA is an all-important tool for traders, especially those who trade in shorter time frames. Because of its emphasis on recent data, it becomes biased towards the latest price action, which allows it to follow it more closely. This can be mined by traders who want to day trade.

However, it is not advisable to use it for longer trade periods since the EMA becomes prone to false signals that can bleed someone who isn’t careful. When used in conjunction with the SMA, the EMA becomes a very important tool that allows one to trade in the direction of the trend.