In today’s world, automated trading is a highly sophisticated trading form, and stratagems formulated for automated systems can allow you to make profits on a consistent basis. In such a system, a programmer feeds some instructions to a computer, which then carries out the trade accordingly. Today, we will look into six of the most profitable automated trading strategies.

If you are a short-term trader, this strategy will suit you well. This scheme is created on the basis of the buying and selling occasions that take place because of the asset’s price being misquoted or because of price inefficiencies. In general, this happens with assets that belong to the same niche.

Evidently, misquoting and inefficiencies are not very long-lasting and are bound to get rectified within a short span of time. Using automated trading strategies, you can sense these factors early and commence the trades ahead of the price rectification.

The above chart shows a trading situation involving Harley-Davidson and Citibank, where the asset prices are similar. So if Harley’s price sinks, Citibank’s price will follow suit. However, they are bound to rise again soon. The statistical arbitrage scheme identifies the price instantly, placing a long trade, only to make a short one after the price correction, thus earning a profit.

The mean reversal scheme is based on the theory that after a period of extremes, things gradually return to normal. In trading, this scheme is used to search for extreme occurrences and then to predict that the situation will return to the mean. That being said, the financial market does not follow normal distribution systems, and several such events clustered together can generate a momentum that prevents mean reversal.

By following this scheme, traders will purchase after the price has dropped significantly after forecasting a return to the usual level. Some Forex traders might use oscillators, such as RSI, for seeking out favorable price levels where mean reversion transactions can be executed. Others might consider financial data, such as income reports or PE ratios.

For instance, if the profits made by an organization in a certain quarter is significantly more than the average, the profits in the following quarter are likely to be close to the mean.

In this scheme, where we use the volume-weighted average price, the trade orders are bulky, but they are placed bit by bit. We consult the currency’s archival volume profiles and release the orders in tiny portions using it. The chief goal of this scheme is to place the trade at the point nearest to the VWAP in order to lessen the market impact.

Automated strategies are carried out using systems that can execute the orders in this way. You cannot do this as accurately or efficiently as a computer using manual trading. 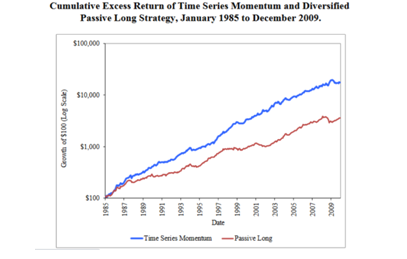 This scheme involves studying the current and archival price data in order to analyze whether the trend will persist and placing trades according to that information. Here, you don’t need to make complicated forecasts. You need to simply follow the trend and execute the trade upon the occurrence of the required event.

Imagine a situation involving an automated trading system where the coder instructs the computer to make a purchase at the point when the 30-day MA rises above the 180-day MA and opens short positions when it sinks beneath the 180-day MA.

Several investors use this particular scheme because it is easy to implement using automated systems. The main rationale behind this scheme is to intermittently invest a certain sum of money into a financial instrument. Although some individuals have expressed their doubts regarding this scheme, it has been found to be extremely effective in real-world trading situations, especially for those traders who are in it for the long haul.

This strategy operates based on the principle that price fluctuation is quite frequent and that a currency can be bought at a lower overall rate in contrast to making a one-time investment. Every time you add funds to a 401k account, you are using this strategy. Earlier it wasn’t easy to implement this scheme using an automated system, but current technology makes it possible.

Market making involves vital arbitrators who carry out trades using assets on a continuous basis. Thus, they contribute to market liquidity and receive compensation for the risk mainly through the capture of spreads.

In the earlier days, this activity was performed solely by human beings working in the Forex market, but now this entire process has been automated. Because of technology making its way into the Forex market, the strategy used by such people has called for automation.

As far as market making is concerned, the strategies used are many, but the majority of them depend on managing inventory efficiently by restricting adverse selection and hedging. For some traders, the limits might be set too tight, and they might wish to surrender their positions swiftly while aiming to end every day on a flat. Some may be in for the long haul and possess a vast and diversified portfolio containing assets for an indefinite period of time.

For a market maker, a high calculation speed is beneficial because it allows them to make updates to the risk and pricing models. Those who are a bit competitive require high-quality data and advanced infrastructure. Although, if the trading period is quite long, these factors may not affect them too much.

In this article, you gained some knowledge about some of the most efficacious automated trading strategies out there. But, there is still a lot to do. In order to make profits consistently, you need a good mentor who will advise you throughout the way and in-depth knowledge about each and every strategy, so you can execute them effortlessly.