In technical analysis, charts tend to give two types of signals – buy signals and sell signals. A buy signal is characterized as an event or condition selected by a trader or investor as an alert for entering a purchase order for an investment.  These signals help people to follow a predetermined pattern of trading or investing.  Buy signals are used by both short-term and long-term traders. Two of the major buy signals while trading are the high and tight flag and pipe bottoms.

What are pipe bottoms?

In chart patterns, a pipe represents a pending market correction and an end to a periodic directional move in price. It can signal the end of a broader trend or the end to a retracement of that trend.  There are two types of pipes, namely pipe tops and pipe bottoms. A Pipe bottom is a chart pattern that is found in a bearish market. It’s a sign that the selling pressure is decreasing in the market.

How to identify pipe bottoms?

To correctly identify pipe bottoms, you can use the following guidelines: 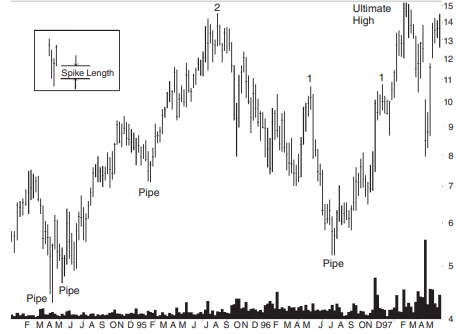 As Pipe bottoms are common, one can be selective while using them. Pipes are usually found at the bottom of a price trend, multiple times as part of a V-shaped bottom. This is especially profitable for swing traders. You can switch to the daily scale after the right price spike and buy when the price closes above the highest peak in the 2-week pattern.  That will get you in sooner than trading on a weekly basis.

Things to look out for when trading pipe bottoms

To realize the full potential of using this pattern, here are certain things you should look out for when trading them.

What are high and tight flags?

High and tight flags are considered one of the best performing chart patterns with the highest average rise of 51%, based on perfect trading with no commissions, as well as having the lowest breakdown failure rate of 1%. It’s a bullish breakdown pattern which is designed to signal the start of an upward move.

How to identify high and tight flags?

When using this pattern, you have to look for the following things. 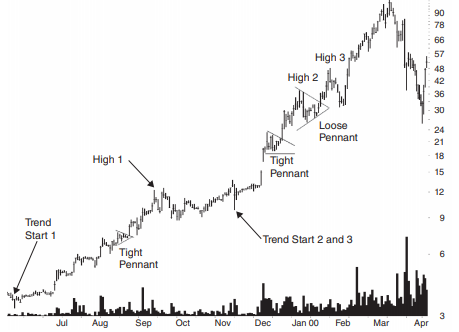 In the chart above, we can see three examples of pennants.

To find these three high and tight flags, you have to look for a rising price trend that has doubled in 2 months or less. Here, the August pattern reaches its highest peak at the start of the pennant on August 16th, at 7.63. 2 months before the high and tight flag, the price reached a low of 3.78. This represents a rise of 102% in 2 months. The most important rule with this pattern is to wait for an upward breakout or a close above the top of the flagpole or highest peak in the pattern.

When trading high and tight flags, you should look for the following things:

Once you have identified those things, you can use the following rules for buying:

Things to look out for when using high and tight flags

The following are the list of things to look out for when trading this pattern:

There are many chart patterns that generate some sort of buy signal when certain conditions are met when the price moves beyond a certain level. The above buy signals are two among the multitude of signals that traders get from chart analysis.