The Volvox Trader website introduces their expert advisor as a “self-adjusted trading robot,” the first of its kind in the world of finance, which is also capable of “beating any market conditions.” It even refers to the system as “the primary key“ to any trader hoping to achieve success trading by generating ‘stable’ profits.

Another Scam Or A Profitable Trader?

While the promise of stable profits and fully automated trade analyses and execution is quite exciting, we notice several red flags when going through their website and reviewing the trading system’s effectiveness. First off, the Volvox automated trader website doesn’t talk about the system developers trading or programming skills. How then do they expect us to trust their system when they insist on operating behind the shadows?

How does Volvox Trader work?

Volvox Trader website starts by enumerating the different causes of failure for both novice and experienced traders. It particularly attributes this to the lack of an effective manual or automated trading strategy capable of helping the trader navigate the complexities of life as the primary reason behind the worrying statistics of over 95% traders losing their money. They apportion part of this blame to lack of proper forex education and the complexities of the global forex market and go on to illustrate how the Volvox trader expert advisor seeks to address the issue.

What is Volvox Trader EA’s strategy?

We consider Volvox Trader EA website evasive in dealing with the question on the strategy used by their automated trader. It only mentions that their system is fully automated, works in an MT4 trading environment and uses inbuilt self-adjusting indicators to trade with any broker. But it is not enough to just say that the automated trader will only use these features to trade two currency pairs EURUSD and GBPUSD on 5-minute timeframes. 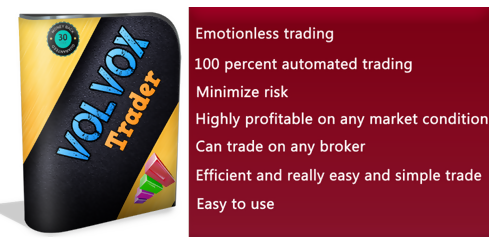 The trading system developers need to mention the type of trading strategy used as well as the risk management tools put in place. Glossing over such important details only adds to our fears about the broker’s untrustworthiness.

The wording of the claims and bold assertions made on the Volvox trading system website are no different from other suspicious autotrading websites. They lay more emphasis on selling the different ‘perfect’ features of the system and little to no attention to  proving its effectiveness. Volvox Trader, for instance, doesn’t provide backtest results for their AutoTrader.

Note that while they are not a mandatory prerequisite, they go a long way in helping a prospective client understand the default system settings especially in such a case where the developer refuses to share the strategy used. It would also help shine a light on such other pertinent issues as whether the trader embraces risk management with its trades and to what extent.

The trading system website shares a link to their live account history hosted on the FX Blue platform that reports an absolute gain in excess of 1000% within the last 300 days. This translates to 26.8% per month and 5.8% weekly gain.

The system executes 3 trades daily and has an average trading length of 39 hours with their risk-reward ration placed at 0.55. While the promise of these is quite impressive for any day trader seeking to earn stable profits from their investments, the huge drawdown that at one time reached 75% should be enough deterrent.

More reasons to be cautious when dealing Volvox trader

According to the FxBlue account statistics, the Volvox Trading system started off well, gaining over 294% in its first month of operation. The monthly gains have since embarked on a fast-paced deceleration path where every subsequent month performs worse than the previous.  And while the system developers promise to keep updating their system settings, they either have failed in this or their updates have proven highly ineffective. In January and February for instance, the trading system reported average gains of 2.1% and 0.7% respectively. Such dismal gains are far cry from the bold “stable profits” claim by the trading system developers.

The pricing of an automated system should be reflective of what the trader stands to gain from its use. And given the negligible gains reported by the trading system in the recent months, one might consider its $179- $499 price range relatively expensive.

The Volvox trader EA glosses over almost every important detail that a trader looks up to when making the buy decision. For instance, it doesn’t mention the strategy used by their system, it doesn’t explain the risk management practices put in place to protect your investment, it also doesn’t talk about the minimum initial balances needed, and more importantly, doesn’t even try to convince its prospective clients about the reliability or efficiency of the system developers.

You will have a hard time not just finding information about the trading system developers but also any independently verifiable customer reviews about the trading system. And while one may link this to the fact that it is relatively new (barely one year old), these bold profitability assertions and guarantees should have earned it a few customers by now, if they were truly effective.

With no clear trading strategy and such a huge drawdown, one can’t help but wonder the level of aggressive trading embraced by the trader. On the surface, the massive risk exposure is indicative of the use of a fairly aggressive trading system that has little to no emphasis on risk management.

3.5
Verdict
Our biggest reservation with the Volvox Trader EA is their blatant lack of transparency when it comes to both the system development and its operation. Their website doesn’t provide a background to the individuals behind the development of the system and neither does it address core bases of its functionality such as the trading strategy used or risk management practices used. For this reason, and up to a time the system developers provides this information, we would not recommend its use by any of our readers. These factors influence our decision to award thee trading system an overall score of 3.5/10.
Looking for the best forex robot?Discover top-performing systems selected by ForexRobotExpert team
go
Tags: Expert Advisors, Forex Robots, Forex Scam